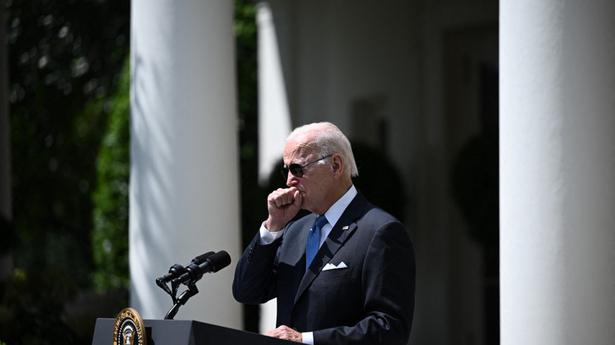 Joe Biden was also scheduled to visit his home in Wilmington, Delaware on Sunday morning, where First Lady Jill Biden is staying while the president is positive.

Joe Biden was also scheduled to visit his home in Wilmington, Delaware on Sunday morning, where First Lady Jill Biden is staying while the president is positive.

President Joe Biden tested positive for COVID-19 again on July 30, a little more than three days after being pulled out of coronavirus isolation, the White House said, in a rare case of “rebound” After treatment with anti-viral medication.

White House physician Dr. Kevin O’Connor said in a letter that Biden “has not experienced a re-emergence of symptoms, and is still feeling quite well”.

According to guidelines from the Centers for Disease Control and Prevention, Mr Biden will re-enter isolation for at least five full days. The agency says most rebound cases remain mild and no serious illness has been reported during that period.

As word of Mr Biden’s positive test came – he had turned negative on Friday morning – the president traveled to Michigan on Tuesday to highlight the passage of a bill by the White House to boost domestic high-tech manufacturing. Just two hours after the announcement. Mr Biden was also scheduled to visit his home in Wilmington, Delaware on Sunday morning, where First Lady Jill Biden is staying while the president tested positive. Both trips have been canceled as Mr Biden has returned to isolation.

Mr Biden, 79, was treated with the anti-viral drug Paxlovid, and tested negative for the virus on Tuesday and Wednesday. Then he was allowed to leave the isolation wearing a mask inside the house. His positive test placed him among the minority of those prescribed the drug to experience a rebound case of the virus.

Both the Food and Drug Administration and Pfizer report that 1% to 2% of people in Pfizer’s original study on paxlovid saw their virus levels relapse after 10 days. According to the FDA, the rate was roughly the same in people taking the drug or dummy pills, “so it is unclear at this point whether this drug is related to treatment.”

When Mr Biden tested negative, he returned to the White House in person for indoor events and meetings with staff and was wearing a mask, in accordance with CDC guidelines. But the president removed his mask indoors while making remarks on Thursday and during a meeting with the CEO on the White House complex.

Asked why Mr Biden was violating CDC protocol, Press Secretary Karine Jean-Pierre said, “He was socially distanced. They were far away. So we made it safe for them to be together, to be on that stage.”

Regulators are still studying the prevalence and virulence of rebound cases, but the CDC warned doctors in May that it was reported to occur within two days to eight days after initially testing negative for the virus. .

“The limited information currently available from case reports suggests that individuals treated with Paxlovid who experienced a COVID-19 relapse had mild illness; There are no reports of serious illness,” the agency said at the time.

When Mr Biden was initially released from isolation on Wednesday, Dr. O’Connor said the president would “increase his testing cadence” to catch any possible rebound of the virus.

Patients should be re-isolated for at least five days. According to the CDC’s guidance, they can end their re-isolation period after a full five days if the fever is cured within 24 hours. [without the use of fever-reducing medication] And the symptoms are improving. The patient should wear a mask for a total of 10 days after the onset of rebound symptoms.

Paxlovid has been proven to reduce serious illness and death in people most vulnerable to COVID-19. US health officials are encouraging people who test positive to consult with their doctors or pharmacists to see if they should be prescribed treatment despite the rebound risk.

Mr Biden has been fully vaccinated, having received two doses of the Pfizer coronavirus vaccine shortly before taking office, a first booster shot in September and an additional dose on 30 March.