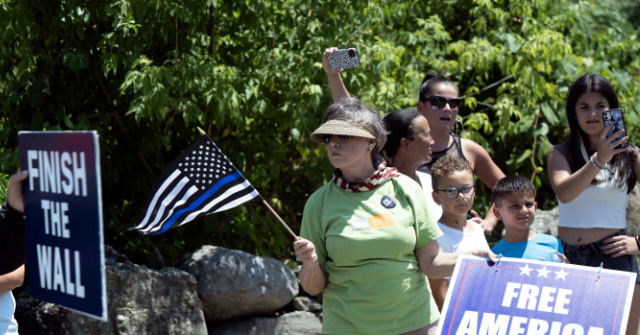 A crowd of protesters met with President Joe Biden’s convoy during a visit to Somerset, Massachusetts, on Wednesday.

Biden visited Massachusetts to discuss his plan to tackle climate change, an issue that continues to rank low on the list of topics American voters see as pressing.

However, Biden’s convoy was met by a crowd of protesters in Massachusetts, who were upset by the display of his work on the way to his speech.

In one video, local residents of Massachusetts can be heard shouting in disapproval at Biden’s convoy as it passes through the state.

Massachusetts residents chanted “Let’s go, Brandon,” which has become a euphemism for “f*ck Joe Biden” among conservatives across the country. Apart from chanting, the crowd thrashed the presidential convoy.

A demonstrator can be seen disembarking the presidential convoy in disapproval.

“Go home,” shouted some local residents. Another resident can be heard calling the presidential convoy “pieces of crap”.

Other residents protested the president with signs expressing their disapproval. Somerset resident Melissa Terra, who organized a group of anti-Biden residents, said protesting the presidential convoy “is a way for people to say how they feel and tell Biden that some of us Don’t appreciate some of his policies.”

Massachusetts isn’t the only state to greet Biden with a “Let’s go Brandon” chant.

In April, a protester holding the head of the Easter Bunny shouted “Let’s go Brandon” at the president as he traveled to Seattle.

In January, Biden was met with a “Let’s Go Brandon” chant as his presidential convoy arrived in Pittsburgh, Pennsylvania.

Biden was similarly met with chants of “Let’s go Brandon” when visiting Kentucky after a tornado hit the Mayfield area in December.