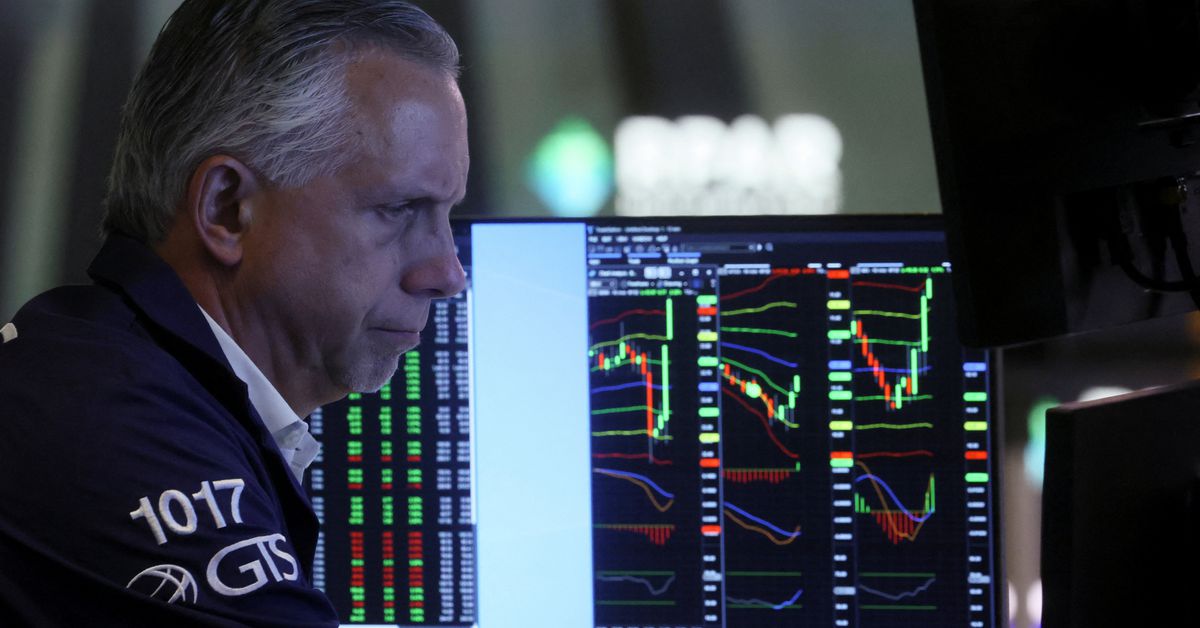 A trader works on the floor of the New York Stock Exchange (NYSE) after the Fed rate announcement in New York City, US, July 27, 2022. Reuters/Brendan McDermid

July 29 (Reuters) – The Nasdaq and S&P 500 indexes rose on Friday and were on track for their biggest monthly gains in nearly 20 months, following upbeat earnings updates from Apple and Amazon and hopes of less aggressive monetary policy.

Mega-cap companies have largely outperformed this reporting season and are forecasting less impact from the current economic turmoil, with investors fearing a potential recession could erode their earnings power. read more

As of noon, shares of Apple Inc (AAPL.O) were up 2.9% after the company said parts shortages were easing and demand for iPhones continued despite consumers tightening other spending. read more

However, gains on the Dow Jones Industrial Average (.DJI) were capped by Intel Corp (INTC.O), which fell 8.9% after cutting annual sales and profit forecasts and missing second-quarter estimates. read more

Meanwhile, investor concerns about big interest rate hikes eased slightly on Thursday, as GDP data showed the US economy shrank for the second quarter in a row. read more

“In terms of a bear market phase, we haven’t yet seen a low for 2022, because inflationary pressures and everything else is still very real,” said David Keller, chief market strategist at StockCharts.com.

Data showed US consumer spending rose more than expected in June as Americans paid more for goods and services, the biggest increase in monthly inflation since 2005. Read more

The three indices were also set for a second consecutive weekly gain.

Of the 279 S&P 500 companies that have reported earnings so far, 77.8% have exceeded expectations.

According to Refinitiv data, analysts now expect S&P 500 profits to rise 7.6% for the second quarter, up from their 6.8% projection at the start of the three-month period.

Read |  3 things to watch in the stock market this week

Reporting by Shreyashi Sanyal and Aniruddha Ghosh in Bengaluru; Editing by Arun Koyur and Anil D’Silva