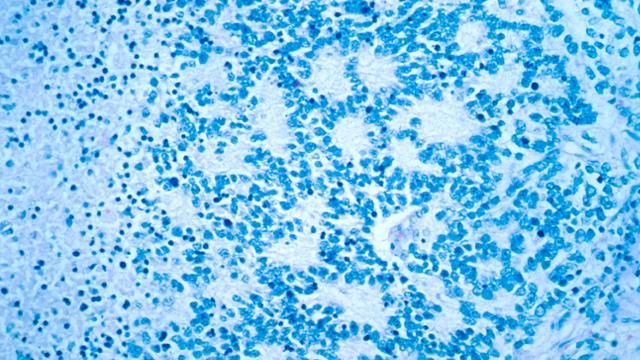 New research from the VCU Massey Cancer Center — published this week in Cell Reports — demonstrated that a novel targeted therapy could be an effective treatment option for a deadly pediatric cancer called neuroblastoma.

Neuroblastoma is a type of cancer that develops in the nerve tissue, most commonly in the glands surrounding the kidneys. Despite many medical advances that have improved disease outcomes, high-risk neuroblastoma is responsible for most cancer-related deaths in children aged five years and younger.

Previous research has shown that activation of a specific group of proteins – MEK/ERK – helps neuroblastoma cells survive and grow. However, a class of drugs used to restrict the function of these proteins called MEK inhibitors has proven ineffective in treating the disease because high doses have been associated with substantial levels of toxicity.

To address the lack of effective treatment options for neuroblastoma, Faber’s lab, along with his colleagues, conducted high-throughput drug screening with SHP099. This compound belongs to a new class of drugs that target and block an enzyme called SHP2, which is along a genetic pathway similar to MEK/ERK.

High-throughput screening is an important method in drug discovery and design that allows researchers to automate thousands to millions of tests on chemical or biological compounds.

Over and over again, Faber and his research team found that neuroblastoma tumors in mice were sensitive to SHP099, and in some models the tumors shrank significantly. SHP099 had a particularly effective effect in tumor cells with limited or no expression of the neurofibromin 1 (NF1) protein. Additionally, they determined that NF1 expression is very low in advanced or relapsed neuroblastoma cells, and that the protein is more readily inactivated in high-risk neuroblastomas.

“We found variable but consistent positive effects in all models of low NF1, high-risk neuroblastoma, which reveals a new drug target in the disease,” said Faber, associate professor at the Phillips Institute for Oral Health Research at VCU. ” Dental School.

Faber said one of the most important findings in the study — made by first authors Jinyang Cai, PhD, and Shiba Jacob, PhD — was that SHP2 inhibitors were ineffective at blocking the function of MEK/ERK in healthy individuals. cells and therefore were not toxic to them.

“These findings suggest that, in contrast to MEK inhibitors, SHP2 inhibitors can be applied at high enough doses to inhibit MEK/ERK signaling in neuroblastoma tumors,” said Faber, who conducted the cancer mouse model core at Massey. I have given my credit for allowing the high efficiency and capabilities of our team. To test SHP099 extensively.

Because there are a large number of SHP2 inhibitors now in clinical trial, Faber will work with collaborator John Glod, MD, PhD, to hopefully bring one of these inhibitors to clinical trial at the National Cancer Institute. Currently, Faber’s group also plans to test SHP2 inhibitors in combination with anti-GD2 therapy, an approved immunotherapy for neuroblastoma.

In addition to neuroblastoma, Faber’s team also found SHP099 to be effective in head and neck squamous cell carcinoma (HNSCC). Separate findings will be published soon, and the team plans further trials of combination therapy with SHP2 and EGFR inhibitors in HNSCC.