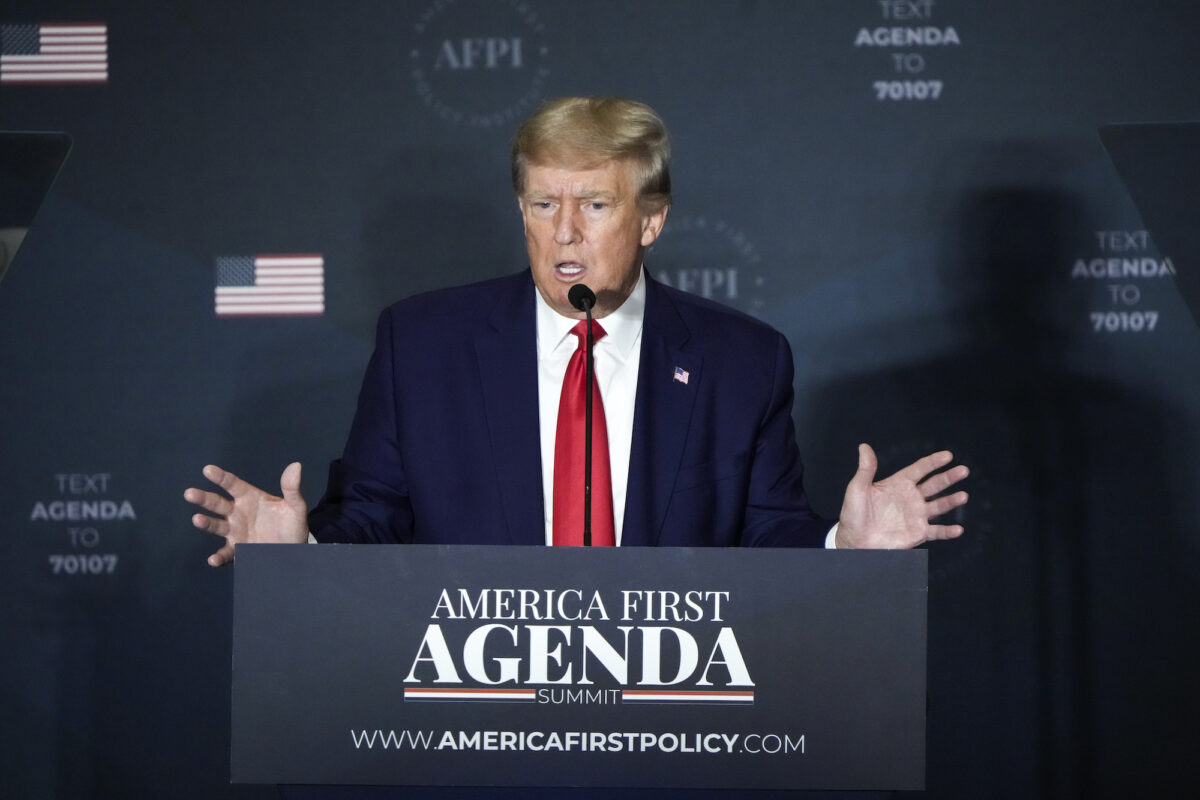 In the middle of watching The Epoch Times’ excellent documentary about January 6th, I began to wonder—and not for the first time—are we on the verge of civil war and if the indictment of Donald Trump by Attorney General Merrick Garland would take us to that brink.

Consciously or unconsciously, this appears to be the ultimate goal of the Committee, especially now that it is reported that only a few are paying attention to it. Such an act would clearly draw attention, to say the least, to a divided land where the former president has 100 million supporters, many of them adamant.

It will also inadvertently erase the word from the previous paragraph, barely there in the first place.

Michael Anton, of “The Flight 93 Election” fame, wrote a few days earlier in another epoch-making essay, “They Can’t Let Him Back”, which begins, “The people who really run the United States have It’s made. Clearly, if they can help it, they can’t and won’t allow Donald Trump to be president again.”

He also writes, “The anti-Trump hysteria is, in the final analysis, not about Trump.”

really. This craze is about preserving a system that is about as far away from our supposed original democratic republic as you can go and outdo, a type of bureaucratic oligarchy commonly referred to as an administrative state. It is ultimately about preserving the thousands, perhaps hundreds of thousands, and possibly millions, of lifelong ruling-class jobs, high and low, or jobs related to or based on them.

Most of these jobs, as already and a growing number know, should not exist. They do nothing to prolong the life of the average citizen and make matters worse in many, if not most, cases.

You can also call it a rule-by-kafka, especially since the advent of COVID-19, the Czech genius has given us the best of our current existence in works such as “The Trial” and more specifically “The Metamorphosis”. details are given. A man wakes up to find that he has become a cockroach.

Trump was rather nave at the start of his administration, employing unknowingly and therefore enabling a surprising number of Deep State’s In Tribune. Not now, if his recent statements are any indication. He is intent on the destruction of the administrative state and a positive return to the “republic for which it stands”. It is also likely that the government Ron DeSantis has seen the situation well, will behave in a similar manner.

What we may see in the next months is an indictment of Trump, based on the “findings” of the January 6 committee, as well as some sort of indictment of Hunter Biden, within weeks, as a palliative. Which will almost certainly come in the form of a settlement. This agreement, as Kafka was well aware, in the dealings of those who control your life, would include a permanent sealing on consent documents, including laptop contents, possibly their destruction, by all parties, to the concrete of the Biden family. Flushing the evidence of legal and arguably treasonous acts, presidential and otherwise, in China, Russia, Ukraine, Kazakhstan, and anywhere down the proverbial memory hole.

Will this be enough to avoid a palliative civil war and get the public to agree?

If a civil war ensues, we can blame Liz Cheney (a comedian somewhat different from Archduke Franz Ferdinand), whose apparent overwhelming motivation—a slight vengeance for her father—would find understanding from Sophocles and Euripides, Both wrote brilliant “Electra” plays.

Watching the documentary also took my mind back more than a decade when, for PJTV, I went to Stanford University to video a lecture by historian/classicist Victor Davis Hanson, known to almost all readers here. Is. I remember Victor saying something blatantly true that I had never thought of before and made me feel a little dumb—that war was a basic human condition and that we were going through an exceptionally rare moment of peace or quasi-peace .

The current Ukraine war is relatively consistent with Hanson’s observation.

But will it work?

So, to channel Hermann Kahn of thermonuclear war fame, it might be time to think about the unthinkable. Thomas Jefferson certainly did when he wrote in a letter to James Madison, “I take it for granted that a little rebellion now is a good thing, and as necessary as a physical storm in the political world.”

He also wrote in a letter to William Smith: “God forbid we will ever be 20 years old without this kind of rebellion…”

Of course, those were the days when we had more weapons than we do today, but the bow and arrow.

War has a way of sneaking up on you. As Leon Trotsky said, “You may not be interested in war, but war may interest you.” This quote from the famous communist is repeated over and over because, unlike most of his propaganda, it contains a circle of truth.

Events get out of control. Imagine what a crazy-sounding moment in history it would be if Liz Cheney’s fury at Trump insulting her father about the Iraq War became the igniting point of a second American Civil War. (Crazy-sounding, yet straight out of a Greek tragedy.) And yet where would the January 6 committee be without the cover of Liz, the quintessential Republican? Will this even exist?

The Second American Civil War may have begun with the arrests of Peter Navarro and Steve Bannon for refusing to speak with the committee. These are the opening shots across the bow. Bannon’s relationship with Trump was at times similar, but Navarro was his virtual right-hand man, indispensable in his dealings with China.

Furthermore, it appears that the two most recent Democratic administrations are preparing for such an internal battle by appointing the so-called Jacques to the highest rank of the military. It makes no sense if you think about our armed adversaries in China and Russia, who would have turned a blind eye to such tactics, even after the defeat of Afghanistan. What a gift from what was once the strongest army in the world.

But if you think about it in the context of the Civil War, if you think that the real concern of our current government is internal, it starts to count, as the recent activities of our Department of Justice, the FBI, the CIA, etc. happens from.

Which side the army will be on is certainly a Cannes-style unthinkable question. It is also difficult to answer. Traditionally, the army would be on the side of the people, especially since its ranks usually consisted of working class youth. But given most of its leadership, it is likely to be split, though it is not clear by what percentage. A war within the military is a distinct possibility. Similarly, there will be war between the police.

Whatever it is, given that it will not be as much a north-south war as the first war – as many red enclaves exist in blue states and many blue enclaves, especially in cities, exist in red states – and given that more The families themselves are ruined, everything is unpredictable.

Read |  Candidates say that they have no control over negative mailers. local news

Perhaps it’s time to give an American alienation—aside from understanding—more serious consideration, as heartbreaking as it is to contemplate. Maybe if we split up, we can learn to be together after a while. Israel and the Arab world are drawing closer to each other. (Yes, they have a common enemy in Iran, but still…)

In any case, Civil War II is terrifying to contemplate with potentially more corpses than the first, when an estimated 620,000 men died. This was out of a population of just 19.2 million. We are currently over 300 million. Do the math – and add up the women who will now be the more likely participants – and the numbers are too deadly to calculate.

Continuing to think the unimaginable, talking that ear, unfortunately also includes contemplating the end result, if we are to be perfect in any way.

Reflecting on this while driving through middle Tennessee the other day to visit a friend who lives in a rural area, seeing endless fields with strong men and women working the land—we might call them patriots—I know. Was that they would win in the end, it would be bitter. They are godly, they are brave, they will persevere, and they are already armed and know how to use those weapons.

After all, if we are Kafka’s cockroaches, it is worth remembering that cockroaches have been around for at least 300 million years and are showing no signs of extinction.

The views expressed in this article are those of the author and do not necessarily reflect the views of The Epoch Times.

Roger L. Simon is an award-winning novelist, Oscar-nominated screenwriter, co-founder of PJMedia, and now editor-at-large of The Epoch Times. His most recent books are “The Goat” (fiction) and “I Know Best: How Moral Narcissism Is Destroying Our Republic, If It Is Not Already” (nonfiction). He can be found on GETTR and Parler @rogerlsimon.